skip to main | skip to sidebar

Once I was a trillionaire

It is today exactly 6 months since the awful events that have rendered me wordless for so long and which I tried to explain in LibraDoodle passim.

I shall not dwell but will tell this. There is no loneliness like the eviscerating loneliness of turning and walking away after the funeral of the one person you loved completely and who loved you back equally. There are no words for it. The empty pain does not subside. It sits there daily, a cold, hard rock in my heart. There are times each day when I just wish it, my own heart, would stop and I could join her, the one I miss so much, so hard, so sweetly. My beautiful, clever Hannah.

But it hasn’t stopped, I am here and life must be lived so lived it will be, if sometimes grudgingly.

One of the events that took me out of the gloom was this week when on Tuesday evening I chaired the Southbank Centre Book Club. The work under inspection was Peter Godwin’s excellent memoir When a Crocodile Eats the Sun and to add a little spice to the event - and also to reward the hardy stalwarts who not only book their tickets, but also turn up – I invited a rather special guest.

You may be aware of this book which explores the appalling events that occur as Zimbabwe sinks into despair, as the so-called ‘war-vets’ requisition farms and as state-sanctioned violence and depravity wash like a dark tide over the beautiful bread basket of Southern Africa. Godwin traces all this through the prism of his parents, his fears for them, his attempts to protect them, and in doing so we learn about his family and the nation they call home, of the revelations that can often arise through periods of high emotion.

Peter is appearing in an event at Southbank next week and on the night we were discussing his work he was launching his latest work the optimistically titled The Fear – The Last Days of Robert Mugabe at a bookshop in West London. But my special guest was his sister, Georgina, who had been a highly regarded broadcaster in Zimbabwe, a Sarah Cox of the nation as she has been described. She features greatly throughout the book and I thought she might give the readers an interesting insight into the family dynamic of a sibling writing a frank memoir. I could not have predicted how generous she was with her time and her answers as she gave well thought out analyses of the situation in Zim now and then, of the emotions surrounding her family’s situation, of her own situation and of the difficulties involved.

It was during an exploration of the economic situation that prevailed in Zimbabwe before it adopted the American dollar, when we were discussing how one actually survives in a country that is suffering from super-hyper inflation, that Georgina removed her wallet from her handbag and produced a banknote.

She handed it to me and for a brief few moments I couldn’t actually believe what I was holding. Like many I had seen the news reports of hundred thousand dollar notes, million dollar and billion dollar notes even. But this? I read the words. I counted the numbers and still it didn’t seem quite real. You wouldn’t believe it if I told you. So I’ll show you. 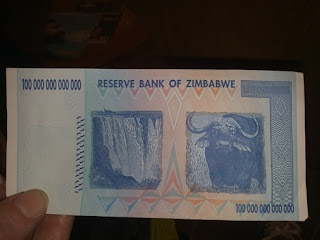 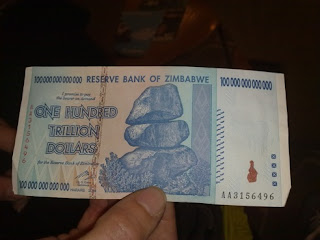 Yes, your eyes do not deceive you. One hundred trillion dollars. Fourteen zeros. Four commas. A lot of money or so you’d think, as it seems to have only been enough to buy a loaf of bread… until the next day of course when the staggering power of inflation rendered it near worthless.

I passed the note to one of the readers and it got passed hand-to-hand around the group to ‘coos’ and looks of utter disbelief. One of them, Eva Arnold, photographed it and I’m grateful to her for letting me use the photo.

So yes, once I was rich. Once I was worth one hundred trillion dollars. Once I loved and was loved so very richly. In both cases all too fleetingly.

LibraDoodle
London, United Kingdom
A bibliophile and author who has broadcast on books and their creators, interviewed 3500+ authors, chairs events at literary festivals and writes for various publications while working, of course, on the great British novel. He was until recently the Literary Editor of The Lady, the longest continuously published periodical for women. To his eternal chagrin, he neither looks nor writes like Samuel Beckett.